Importance of MVP and MBI in Project Management 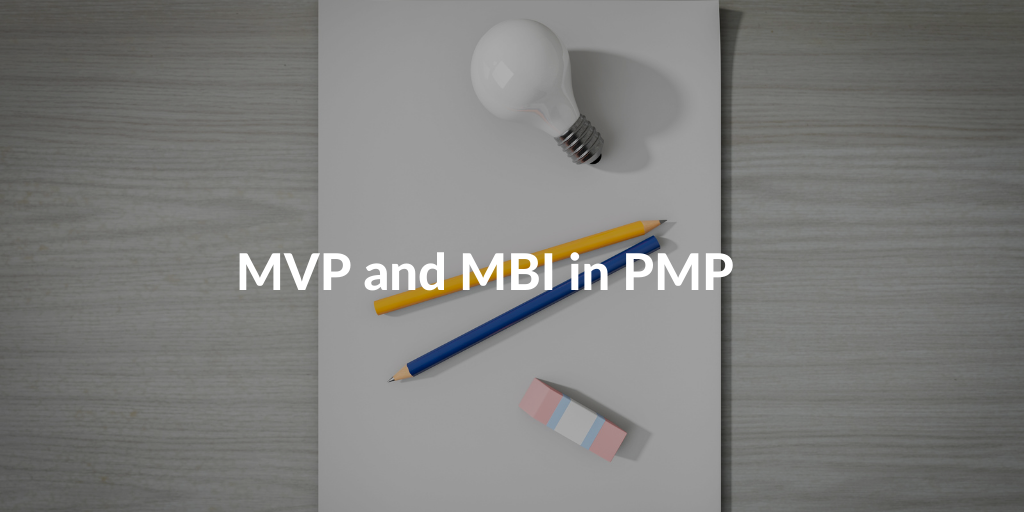 PMI’s PMP certification underwent a major change in 2021. Unlike in previous years, the Exam Content Outline (ECO) balances the certification content between the traditional method of project management and the management of ongoing projects in Agile or Hybrid mode. In fact, currently, half of the 180 PMP exam questions are about Agility.

Among the new concepts introduced in the official training material of PMI, we can highlight the Product Minimum Viable (Minimum Viable Product – MVP) and the Minimum Business Increment (MBI). These concepts are widely used and come from the field of ‘Lean Startup’. Within the new PMP training they are included in the context of Agile methods.

Origin and definition of the MVP

MVP stands for Minimal viable product. Frank Robinson introduced the concept of MVP in 2001 and sees it as the result of the process of parallel product and customer development.

Robinson has found that the team spends a lot of time adding features that do not add value, which creates additional risk. The solution is therefore to find the right size of the product for the company and for the customer. This should be enough to drive customer adoption and customer satisfaction.

In 2011, the term was repeated by Eric Ries in his Best-Seller “The Lean Startup” which presents his experiences in the creation of startups. He defines MVP as a new version of the product that allows the team to gather as much knowledge as possible about customer needs and validate them by testing hypotheses. The goal is to minimize the effort and time in product development.

Eric Ries cites Dropbox as an example which used this concept and created a 3 minute video to explain how the product works. In a single day, the signatures of the people involved went from 5,000 to 75,000 without having the product.

MVP also allows for rapid feedback from clients on their interests and preferences without engaging in a cumbersome and haphazard development process that may ultimately be out of line with their expectations.

A 2013 Standish Group study on IT development projects shows that only 20% of features are frequently used by customers and 50% of features are used very little. For the remaining 30% of the features, they are sometimes used and do not really help improve customer perception.

The results are consistent with the Pareto principle which is based on the following law: 80% of the effects are the product of 20% of the causes. Thus, the adaptation of this rule shows that 20% of the functionalities achieve 80% of customer satisfaction. It should also be remembered that the first principle underlying the Agile Manifesto is to satisfy the customer by quickly and regularly delivering high added value features.

The above results clearly show the importance of MVP in product design and development based on the concept of “minimal” and “viability”.

PMI also finds that creating an MVP inspires the team to achieve the goal of the project. When the results are too abstract or too far apart, teams can become discouraged or overwhelmed. Minimally viable products create short-term urgency and a sense of accomplishment. All of these are valuable for the client, but also for the project team.

The idea of ​​an iterative process is to create a version of a raw product and at the same time seek customer feedback. Thus, desired changes and design issues are identified at the right time. Each cycle is an opportunity to improve the product in an iterative and / or incremental way.

Characteristics of an MVP

Its concrete examples show the importance of MVP in the incremental creation of value and in the control of the risk of non-compliance until the delivery of the final product.

One of the fundamental characteristics of agile approaches is the maintenance of a product backlog that reflects the list of desired capabilities, written in the form of user stories. This list is prioritized by presenting the elements with the highest commercial value first.

Among the prioritization techniques mentioned in the context of PMP certification, we can mention:

Some projects improve or revise products that are already in service. As such, a MVP is not necessary to assess interest. Using the concept of minimum business value increment (MBI) is more viable.

MBI is the smallest amount (increment) of value that can be added to a product or service that benefits the business.

The MBI provides a common guideline and direction within all of the company’s teams. Definition, implementation and commissioning work is focused on delivering a high added value increment. It thus makes it possible to sequence the list of jobs based on the realization of value as the basic criterion.

The use of an MVP is therefore justified in the case of the discovery of certain elements of value and in a context of innovation (new customers, new products and concepts).

Whereas the MBI is used in the case where the customers or the product already exist and one wishes to improve the existing offer.

Continue reading and find out more about PMP.

Haykel is an accredited PMP, PMI-PBA, PRINCE2 trainer with over 15 years of field experience and PMI Authorized Instructor.